"Pampas", the sequel of Maze of Galious

A few months ago Nenefranz (Zombie Incident and Who Dares Wins 2) and I started to work on a MSX2 sequel of the mythical "Maze of Galious".

As this sequel has no title yet, we internally call it "Pampas". 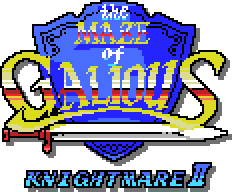 35 years after Popolon and Aphrodite defeated the evil Galious, ten demons invaded the castle cursing everything inside.

Pampas and Selene, children of Popolon and Aphrodite, are the ones who have to defeat all 10 demons in order to free the castle from their dark influence and bring the peace back.

The game itself is based on "the Maze of Galious", having a huge castle to explore, a lot of items to find, 10 worlds and 10 demons to defeat. We didn't want to do a different game, but something similar to what we enjoyed when we were children.

Although the base is the same, you'll notice some differences in this sequel:

The heroes are Pampas and Selene (instead of Popolon and Aphrodite). Pampas is a warrior (like his father) that will use his weapons against his enemies. Selene, his younger sister, is a sorcerer who will use her magic.

Unlike MoG, Pampas and Selene have different gameplay. They won't use the same type of attacks. Each character has his/her own way to face adversity and will prove better or worse before certain enemies, demons or even the type of room.

"Pampas" has an amount of items slightly bigger than MoG, and a F1 inventory where the player can select the character to play with (Pampas - Selene). 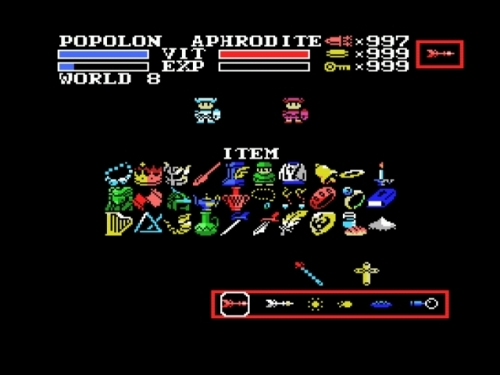 The weapon selection is gone. In "Pampas" all weapons and magic are used directly from the keyboard (by pressing a specific key for each one). Thanks to this feature, the player will be able to use the most appropriate spell in each moment without having to enter the inventory and change them.

Besides, the player can navigate on all items, reading their descriptions and finding out what are they for without drawin on the instruction manual.

The inventory also shows the map of the world we're it.

Instead of spending a key to open a door, the player will just need the item "key". Once it's found, all doors will be open without the need to farm keys. 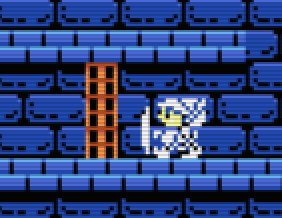 Like in MoG, worlds are spread all over the castle.
As the goal of the game is to defeat all 10 demons, the player will be able to enter any world and defeat the demon inside in any order. However, some worlds will need an item you won't have at the beginning of the game.
Tombstones

But, those symbols can only exist in their world. If we go back to the castle, they will be erased from our memory. So, we'll have to find them all in a row without returning to the castle or die. Once we have the name of the demon, we no longer will need to search for them.

Current status of the game

Nowadays (29th Dec 2020) we have a PC version (that simulates the game on a MSX2) working with the whole castle done, all 10 worlds, all enemies, items, weapons and all 10 demons working.

We have Néstor Sancho (Stevedore) and César (Guindako) testing the game for us.

We're also finishing some graphics still to be done (demons, and some enemies)

Last but not least, we still have to do the sound stuff (still don't know if music will be PSG or SCC) and the non-game part (like the main title, intro and ending).

It's still too soon to have an exact date, and the current COVID crisis makes it even more uncertain, but we'd like to release the game in the next RUMSX.

The game will need a large ROM, that are more expensive, so the game will cost 40€ to 45€.

For those who don't own a MSX2 and can't enjoy the game in its original version, we're planning to launch a PC/Switch version later. Besides playing it like in an MSX2, it will include the chance to play it in a local cooperative mode with Pampas and Selene at the same time.

We're aware that Santi Ontañón started "the Maze of Galious 2" project and that he will finish it eventually. In order to prevent any conflict between both projects, we did a story that takes place further in the future. Who know, maybe with the release of "Pampas" Santi will encourage and continue working on his MoG2. ;-) 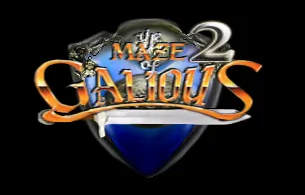 There's also an incoming patch that brings the original MoG into MSX2. In our case, as all graphics (heroes, monsters, scenarios) are new instead of a porting of the original ones, it won't have any conflict with this patch too. 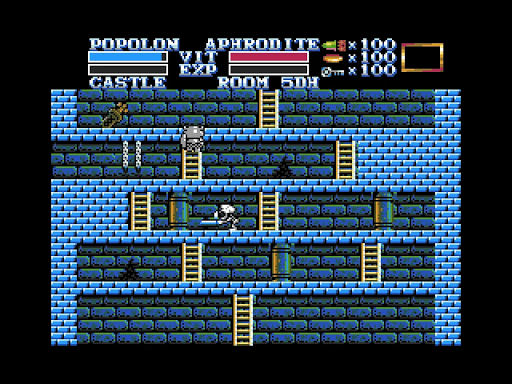 The game design is not closed. Our will is to ask for the opinions of fans from MoG about some aspects like gameplay, graphics and others. Besides, we'd like to receive proposals and wishes from the community, and answer any question you may have.

The goal is to create a "Pampas" as close as possible to the game we all wish.

We're doing our best, and we're doing it with great enthusiasm.

Thank you for your lecture!

Posted by franfistro at 4:14 AM